Traditional Chinese Medicine(TCM)  is one of the world's oldest medical systems that is still widely practiced nowadays. It is an unique and independent medical system which originated in China and has played a major role in curing illness and maintaining the health and well-being of Chinese people for thousands of years.

It is getting more popular in the world. It includes several TCM medical therapies: Acupuncture , Chinese herbal medicine, Hot cupping, Moxibustion, Acupressure/Chinese Massage/ Tuina and so on. It is a natural, safe and effective way to get a healthy and better life. Nowadays more and more people realised that and come to TCM for a wide range of health conditions including physical and mental problems.

TCM is a holistic medical system which is based on some important principles: Yin-yang theory, The Five Elements, Visceral Theory, Qi, Blood and body fluid, The Meridians.

You can rely on Eastleigh Acupuncture Centre in Southampton

All Eastleigh Acupuncture Centre's acupuncturists are qualified, highly experienced. They all graduated from Traditional Chinese Medicine(TCM) universities, over 25 years' experience in practising TCM. All of them had been acupuncturists/ TCM doctors in hospitals in China.

Our Acupuncturists/ TCM practitioners in Eastleigh:

He has received very good reviews from his customers, please see here for testimonials.

Dr Ma got her first degree after 5 years training from a medical university in China in 1996 and worked in a hospital in Beijing for over 7 years. In 2006, she has gotten her Master Degree of Traditional Chinese Medicine (TCM) after 3 years' full time training in Beijing University of Traditional Chinese Medicine. Since then she came to the UK and practiced in Dorset, Southampton as acupuncturist and Chinese herbalist. She is a highly experienced acupuncturist and Chinese herbalist. 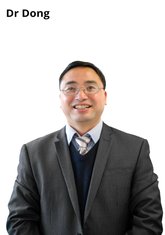